“Without justice being freely, fully and impartially administered, neither our
Persons, nor our rights, nor our property, can be protected. And if these, either of them, are regulated by no certain laws, and are subject to no certain principles, and are held by no certain tenure, and are redressed when violated, by no certain remedies, society falls of all its value; and men may as well return to a state of savage and barbarous Independence”.

The Law is not static, but is subject to continuous change. When we come across certain legislations, we tend to believe that it will solve specific problems in the society. It is however interesting that many deeds of Man have not been catered for by any law. In this contribution, the inevitability of the dynamism in our law, the essence of Pre-election suits in Nigeria and how the courts have reacted to issues of law as it relate to Pre-election dispute in Nigeria would be examined holistically. 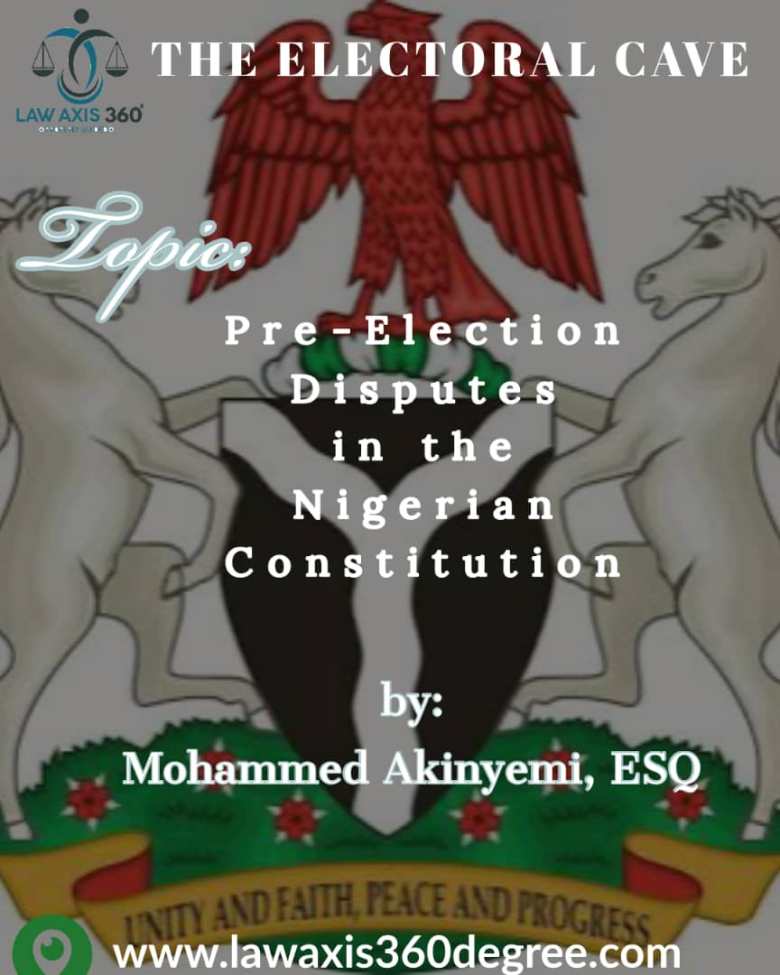 INTRODUCTION
Pre-elections dispute in Nigeria as the phrase connotes, principally deals with the issues arising from the results of primary elections held by different political parties. An aggrieved person who is dissatisfied with the process, conduct and result emanating from a primary election can challenge same in court by following the laid down procedure governing it.

Pre-election dispute encompasses the stage of conducting party primaries to holding of actual elections[1]. It permeates through the stage of primary election and gives rise to the question of whether or not the candidate of a political party has been duly nominated and other issues pervading the entire political party machinery. Where the court finds that a candidate has not been duly nominated, such candidate would be disqualified. Where the court finds otherwise, candidacy shall be validated.

THE SELECTION OF CANDIDATES IN A PRIMARY ELECTION

It is expected for every political party to field candidates for elective positions, of which the deadline set by the Independent National Electoral Commission (INEC) must be met. A Political party in this instance can carry out this exercise diversely. The 1999 Constitution of the Federal Republic of Nigeria and Electoral Act 2010 has given political parties the latitude to choose between Direct primary, Indirect primary or Consensus. Political parties must issue a 21 day notice to INEC of its intention to conduct its primary by which its candidate for General election will emerge. Section 87 of the Electoral Act 2010 states:

a. In case of nomination to the positions of Presidential candidate, a party shall
i. Hold a special presidential convention in the Federal Capital Territory or any other place within the Federation that is agreed by the National Executive Committee of the party where delegates shall vote for each aspirants at the designated center; and
ii. the aspirant with the highest number of votes at the end of voting, shall be declared the winner of the presidential primaries of the political party and the aspirant name shall be forwarded to the Independent National Electoral Commission as the candidate of the party.

b. in case of nomination to the positions of Governorship candidate, a political party shall, where it intends to sponsor candidates-
i. hold a special congress in the state capital with delegates voting for each aspirants at the congress to be held at a specific date appointed by the National Executive Committee of the party; and
ii. the aspirant with the highest number of votes at the end of voting, shall be declared the winner of the primaries of the political party and the aspirant’s name shall be forwarded to the commission as the candidate of the party for the particular state.

c. in the case of nomination to the position of a candidate to the Senate, House of Representatives, and State House of Assembly, a political party shall, where it intends to sponsor candidates-
i .hold special congresses in the Senatorial District, Federal Constituency and the State Assembly Constituency respectively with delegates voting for each of the aspirants in designated center on specified dates; and
ii. the aspirant with the highest number of votes at the end of voting shall be declared winner of the primaries of the party and the aspirant’s name shall be forwarded to the commission as the candidate of the party.[2]

A typical example of the power wielded by the National Executive Committee of a party was exercised in the 2019 Governorship primary election of the All Progressives Congress (APC). The National Working Committee panel of the APC declared Prince Dapo Abiodun as the Governorship candidate in the 2019 election. However, the State chapter working committee declared Adekunle Akinlade as the Governorship candidate. By virtue of the provisions of the law that it is only the National Executive Committee that has the power to conduct primary election, Prince Dapo Abiodun was declared winner of the primary election. In their words, “As far as the APC is concerned, this committee is the constituted one for the conduct of the election by the party. If there is an election for the emergence of any other candidate, we are not aware of it in Ogun state, rather than the one so announced by this committee”. No truth can be far from this!

WHO CAN CHALLENGE THE OUTCOME OF A PRIMARY ELECTION
Ordinarily, courts are not inclined to interfere with the affairs and activities of a political party. The business and how political parties conduct their activities cannot and would not be the business of any court of law. The reason for this is because by undertaking to be a member of an association (Political party), you have subscribed to the laws guiding the activities of the party. However, this is not to say that resolutions of a political party cannot be challenged in court. Where a party guideline and constitution is inconsistent with extant laws or where a political party acts arbitrarily, courts would not hesitate to intervene. In the selection of candidate, an aggrieved person who believes the party has flouted its constitution or guidelines, can challenge it in court.

“An army is greater than the numerical strength of its soldiers. In the same vein, a political party is greater than the numerical strength of its membership just like a country, for instance, Nigeria, is greater than the totality of its citizens. It follows that in the case of a political party, such as the 1st appellant herein, the interest of an individual member or a group of members or a group of members within the party, irrespective of the place of such members or a group in the hierarchy of the party must yield place to the interest of the party. It is the greed, borne of inordinate ambition to own, control and manipulate their own political parties by individuals and groups therein and the expected reaction by other party members that result to the internal wrangling and want of internal democracy that constitute the bane of political parties in Nigeria…”[5]

It is for this major reason that courts would not fold their arms by allowing parties to be anarchical when they are expected to be democratic. As a matter of fact, the political idiosyncrasies in our political system have not stopped the arbitrary act of political parties.

The legal framework that lays credence to this is section 87(9) of the Electoral Act, 2010. For ease of reference, it provides:

Section 87(9) of the Electoral Act, 2010 is intended to vouchsafe to actual applicants who participated in their party primaries the right to impugn the conduct of such primaries for non-compliance with the provisions of the Electoral Act and Guidelines of their parties. It serves the useful purpose of providing avenues whereby aggrieved persons could be heard and air their disenchantments.

Before a plaintiff can successfully invoke the jurisdiction of the Court pursuant to the provisions of section 87(9) of Electoral Act, the complaint must be in relation to the conduct of primaries for the selection or nomination of a candidate by a political party. The section envisages that an aggrieved party should have an avenue to lay a complaint and ventilate his grievance for the purpose of seeking redress.

The power of an aggrieved aspirant who is not satisfied with the conduct of the primaries by his party to elect a candidate must bring himself within the purview of section 87(9) of the Electoral Act, 2010 (as amended){7]. It is only if he can come within the provisions that his complaints can be justiciable as the courts cannot still decide as between two or more contending parties which of them is the nominated candidate of a political party; that power still resides in the political parties to exercise.

2. Section 87 of the Electoral Act

Mohammed A. Oyelade Esq is a Legal Associate in Afe Babalola SAN & co, Abuja. His core area of interests spans through Constitutional Law & Election Petition. He is very current on National isues and always ready to learn.